Blog8- WHY MEDIA LITERACY MATTERS IN YOUR PLN ?

Open dialogues about media literacy and factual information can create conflict, why does this happen?

According to Jesse and Julie Smith’s conversation, the conflict between media literacy and factual information happens because that somebody doesn’t accept facts. It is like the Familiarity Backfire Effect, which is to protect people’s own opinions from external information when people passively accept information bombardment. Slowly, the Backfire Effect will make people less and less suspicious of themselves, and take their own opinions as a matter of course.

What is the benefit of having a PLN that values media literacy?

Having a PLN that values media literacy can help us determine how we view ourselves and how we view people who aren’t like us.  In today’s internet age, it is no longer that information is pushed to us but we pull news from thousands of information. We consume media in order to satisfy certain emotional and intellectual needs (Jesse and Julie Smith). Having a PLN with good media literacy will reduce the bias and make us view the message that we disagree. News is kind of a business and we should not be manipulated by it or the organization behind it. Having a PLN that values media literacy can achieve that.

What is media literacy?

Media Literacy is a person’s attitude and ability to recognize, judge, and use media. It refers to people’s ability to choose, understand, question, evaluate, create, produce, and speculate when facing various information in the media (Trilling & Fadel, 2009). “Media literacy education” or “media education” is different from media professional education for training media professionals. The main object of education is all citizens. The goal of education is to cultivate the ability of all people to critically think and produce media information. In other words, the media literacy learning process focuses on problem exploration, but does not give a “standard answer”. The answer is left to different individuals and communities to find on their own. 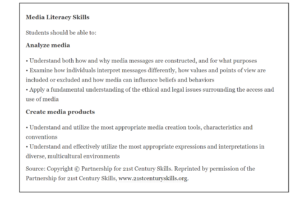 Why is it important?

Social media has become part of our everyday. A survey shows that most adults read no more than one headline before reposting an article, and more than 75% of adults cannot identify fake news . Also, 23% of respondents regards Facebook as major  sources of news（Silverman & Singer-Vine, 2016). Due to the surplus of information on the Internet, we need to systematically learn to distinguish their true and false, and find what we really need among those messages. Especially for parents, they urgently want a book or knowledge to teach their children how to perform better in social media and not be misled by violence and misinformation. Media literacy convinces people that fact finding in this fire hose of information is up to us (users).

Why is it dismissed?

On the one hand, some educators believe that the work of these critical media educators is actually a kind of ideological manipulation, allowing the media to accept a form of “critical analysis” whose role is not only in the obedience and consent of orders. It concluded that this brutal practice will inevitably fail because it condemns the love of children (Kline, Stewart & Murphy, 2006). On the other hand, most of people consider media literacy educators as librarians. They think it is a tool that teaches how to use meida just like how to find a proper book in library while it is actually not. It is a subject to teach critical thinking.

Why should you aim for varied views but factual consensus in your PLN?

Based on previous course, it is beneficial to maintain an inclusive and diverse environment in  our PLN to accept different perspectives. Those views help us understand how other people in this world think, which minimum the bias. However, all various views should be published under factual consensus such as “the sun rises from the east.” The fact is a statement that can be proven.  Both Trump’s supporters and opponents can publish conflicting views, but they all agree that Trump was elected  as the president of the United States in 2016. Therefore, we should aim for varied views but factual consensus in PLN.

Theme by Anders Noren — Up ↑